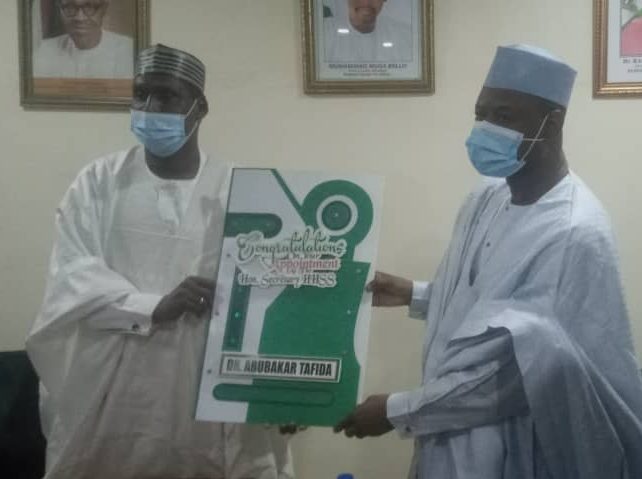 December 8, 2021 - In Communiques‚ News‚ Press Releases By admin Comment off

The Hon. Secretary FCT Health and Human services Secretariat (HHSS) Dr. Abubakar Tafida has expressed excitement seen the fact that FCT has the second strongest Health team in the Country, he added that with the Caliber of the team and their Commitment the FCT Health Secretariat is sure to deliver it’s mandate, given the needed support that will drive FCT Health Sector to greater Heights.

The Honourable Secretary Health and Human Services Secretariat Dr. Abubakar Tafida has also called on the management staff of the FCT Health Secretariat to give him the necessary support needed to acheive the mandate of the FCT Administration.

Dr Tafida made the call while receiving the handing-over notes from the former acting secretary Dr Mohammed Kawu in a brief ceremony at the Hospitals Management Board conference room Area 11, Abuja.

He described the medical team in the FCT as the strongest team in Nigeria’s public health industry that can deliver set objectives.

“we have the second, if not the first strongest health team in the whole country, so with that, a portion of my worry has been taken away, because when you have a strong team and add some commitment I think we should deliver.”

He commended the former acting secretary for the gaint strides achieved during his tenure and also thanked him for the advice he has been getting.
“Remarkably Dr. Kawu is appointed as part of the team to continue working with us and since the swearing in, all I’ve had from him were advices on how to improve on what has been done”.

“it is worrisome because if you want to really improve services, you need to have people that can deliver, yes we have a strong team here, but we need to really take a look at our facilities, because whatever skills that we are going to put across, and you do not have the right people to give you the result, we will not likely get what we need to”.

He said the management gave him the support he needed and urged them to accord the same support to the New Secretary.

The event was attended by the top management staff of FCT- HHSS.

Previous FCTA Wage War Against Drug Abuse Amongst our youth. Next THE FCT MANDATE SECRETARY OF HEALTH COMMENCES SENSITIZATION AGAINST CHOLERA DISEASES.